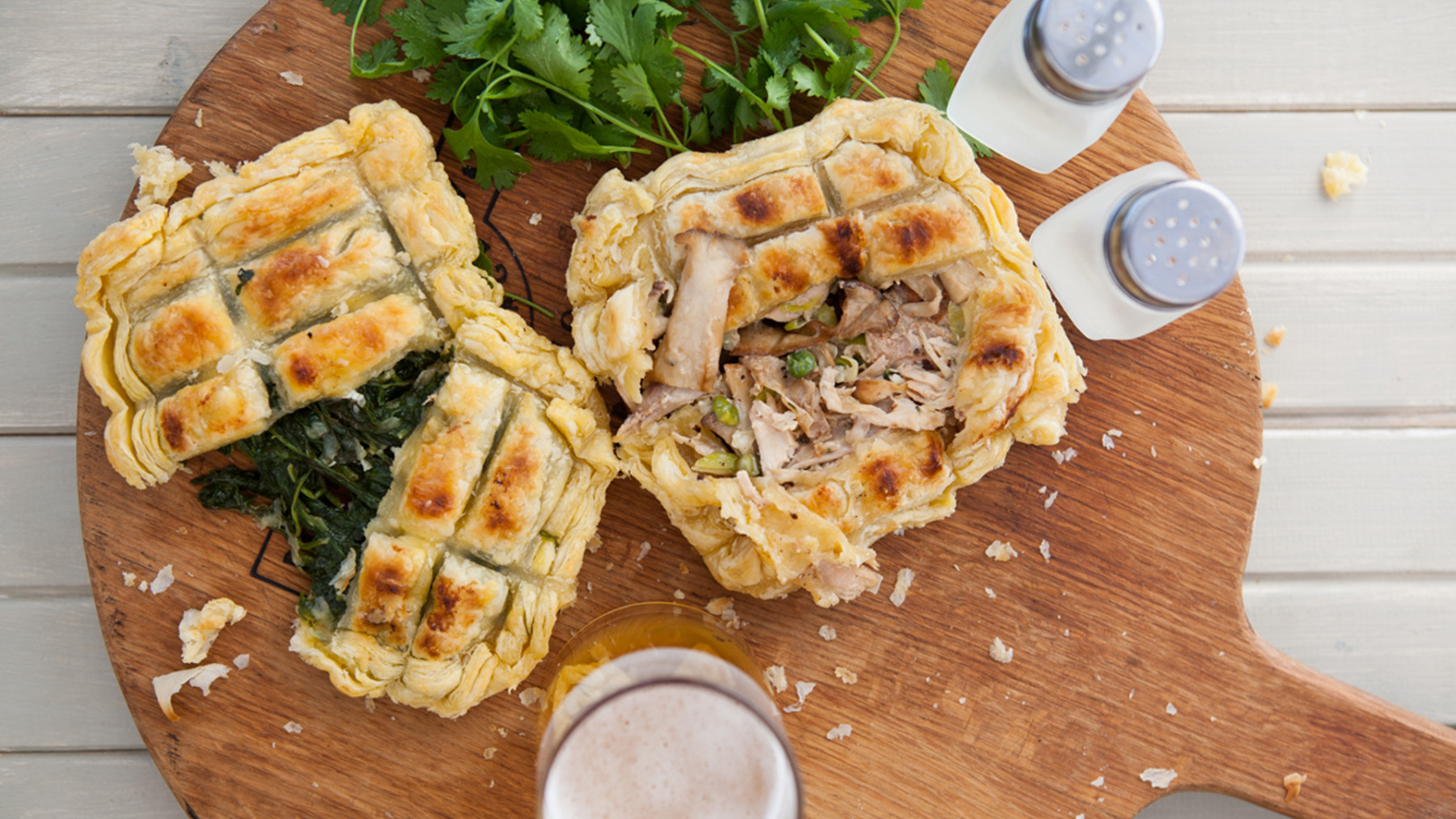 When I was first told about the braai pie by Quint, one of my best mates, I was a bit sceptical. How could puff pastry be put on the grid, braaied and still turn out to be edible? He promised me it worked. So I gave it a bash and I can now wholeheartedly recommend you do too.

First you need to make your fillings. After some testing, these are a couple of my favourites:

Pan-fry the mushrooms, leeks, onions and garlic and let them sweat off any excess juice. Take your leftover chicken, tear it up roughly into strips and add it to the pan. Chuck in the peas and then a splash of beer. Be stingy – think of it as though you’re giving a six-year-old kid a little taster. (Keep the rest for yourself.) Add a splash of cream and let the sauce cook down. You want the filling to be juicy but not overly moist otherwise when you braai the pie it’ll disintegrate into a soggy bomb.

Dump the mussels in a pot, add a splash of white wine, put the lid on and steam until they open up. Take them out of the shells, remove the beard (if you haven’t already done so) and set aside. Clean your prawns, remove the shells and seal them off in a pan with a knob of butter and the garlic. Add the mussels to the saucepan with a splash of cream and a little drizzle of the salty water you steamed the mussels in. Add the coriander. Mix the whole lot up, chuck in the spring onions and let it simmer until the sauce has cooked off a little. As with the chicken, pea and beer pies above, the mixture must not be too moist.

Preheat a pan and add a couple of knobs of butter. Add your spinach, onion, garlic salt and pepper and stir around till the onion is soft and the spinach cooked. Spinach and butter are best friends – you can almost never add too much butter. Remove from the heat, let it cool down, and then crumble some feta over the spinach.

If you don’t have the energy to make your own pastry, just buy some rolls of puff pastry from the store. Sometimes it’s okay to take a shortcut. One sheet of pastry will make three pies. Whatever you do, try and keep the puff pastry as cold as possible. Roll it out and cut it into six even-sized squares. Scoop a biggish spoonful of whichever filling you’ve made on to the centre of one square. Cover with another square and push the sides together using your fingers or the tines of a fork, ensuring that it’s completely sealed up. Repeat with the remaining squares of pastry.

Brush the pastry with a little egg white, and using the tip of a knife, cut three small incisions on top of each pie – this will stop the pies from exploding when they’re on the grid. Put your pies in the fridge so that they harden up a little before you braai them.

Once the fire is ready with nice medium coals, place your pies inside one of those braai grids that close up (the same one you use forboerie). There’s no need to grease the grid – there’s load of butter in puff pastry, which will prevent it from sticking. Take a couple of bricks and stack them on either side of the fire (about four each side). Place the grid on top of the bricks and turn the pies often to avoid burning them.

If the pies start spitting at you, best you jump out of the way until they’ve calmed down and if they break open it probably means you weren’t turning them often enough or your mixture was too soggy. (If at first you don’t succeed, you should try, try, and try again.)

When the puff pastry is nice and golden brown, your pies are ready to eat. Serve the chicken pie with beer, the mussel and prawn pie with a glass of good white wine, and the spinach and feta pie with whatever tickles your fancy.

The taste of puff pastry cooked over coals is unbelievable and I can’t think of a better way to get that smoky flavour to infuse in a pie. Delicious. Umami and all that good stuff!